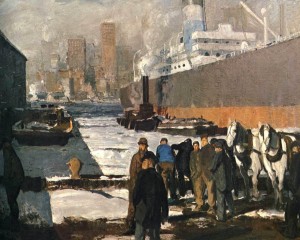 Is the British National Gallery’s acquisition of a George Bellows painting sold by Randolph College ethical?

Should nations sell cultural heritage to balance the budget?  Portugal plans to sell Miros.  Should museums be able to do the same?  The Delaware Art Museum plans to sell works to stabilize financially, it says.

New Brooklyn Museum show takes compelling look at the Civil Rights Movement.  “The show gets the balance of history right in other ways, too, by letting it be confused and confusing, a thing of loose strands and hard questions”  from the NY Times review.

The Museum as warehouse of memory: Berlin Museum is a confidential tip to insiders.

Unbeloved history? Discussions about the Jewish museum in Cologne are ongoing.

The home of Martha Mahlungus, an activist–and mother– will become a museum in South Africa.

The NSA in the museum: About total control. An exhibition in the Museum for communication in Berlin.

With the term “curator” used for everything these days, what does a curator actually do?  Here’s one take.

Debates over a slavery museum for the state of Virginia.

Thought-provoking catalog from the Tartu Art Museum in Estonia,   “Is This The Museum We Wanted?”

The Institute of Ethnology and Anthropology of the Russian Academy of Sciences has provided open access to dozens of monographs and articles.

US National Women’s Museum swamped in controversy long before opening.  Politics or mismanagement?

NEW EDITION. The second edition of “Innovations in Museum World: Collection of Scientific Articles. Annual” came out. Novosibirsk: Publishing Center of Novosibirsk State University, 2013. The second edition “Museum as a Communication Protocol” is devoted to communication processes in modern museum, analysis of the museum audience, museum demand, and the problems of heritage interpretation.  For more information on the edition, please contact [email protected]

Remains of the strong protest of the citizens against the extensive reconstruction of the Stuttgart main railway station will be exhibited at the Museum of the Deutsche Bahn (German Railway), despite displaying harsh verbal attacks on their CEO.