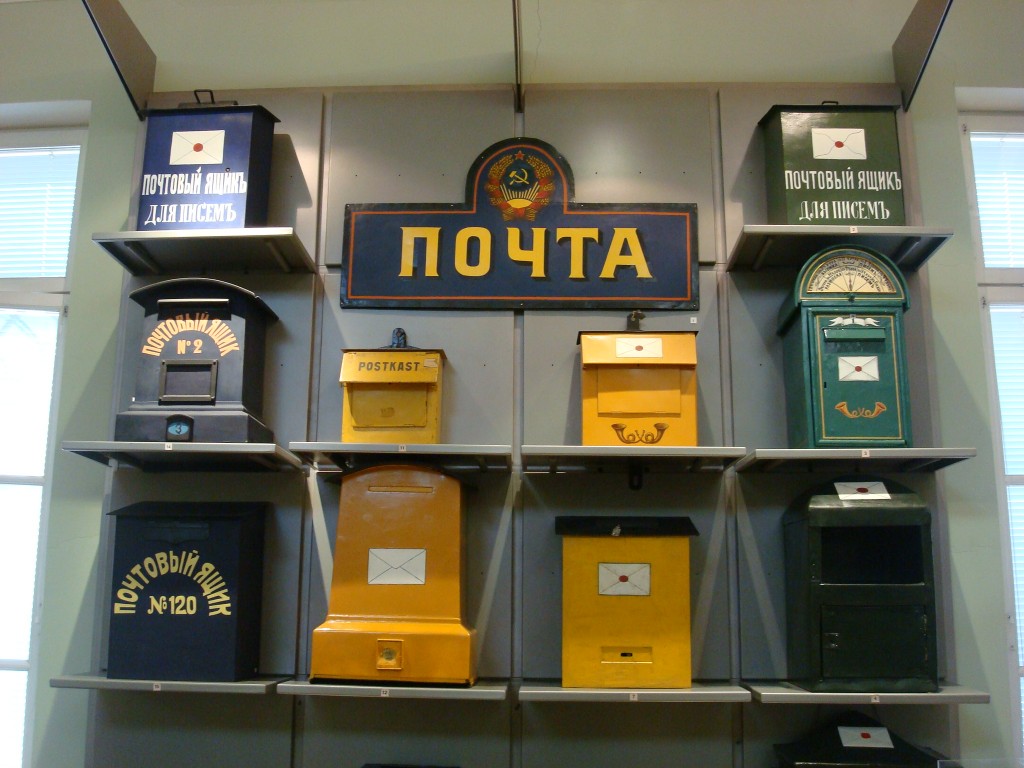 Conference Section 4 on Thursday was officially running under the topic of ‘Museums and Internal Politics’ and took place at the A.S. Popov Central Museum of Communication. Founded as the museum of telegraphy, sitting just opposite the huge main post office building in Saint Petersburg, it was reopened in 2003. The new name reflects the many new topics that were then integrated and followed up through time– from horseback riding messengers until modern telecommunications. You can tell that major efforts have been made to include new ways of display and apply highly modern media to attract a wide range of audiences. The museum, run by 63 members of staff, welcomes 90,000 visitors per year, many of whom attend special events. 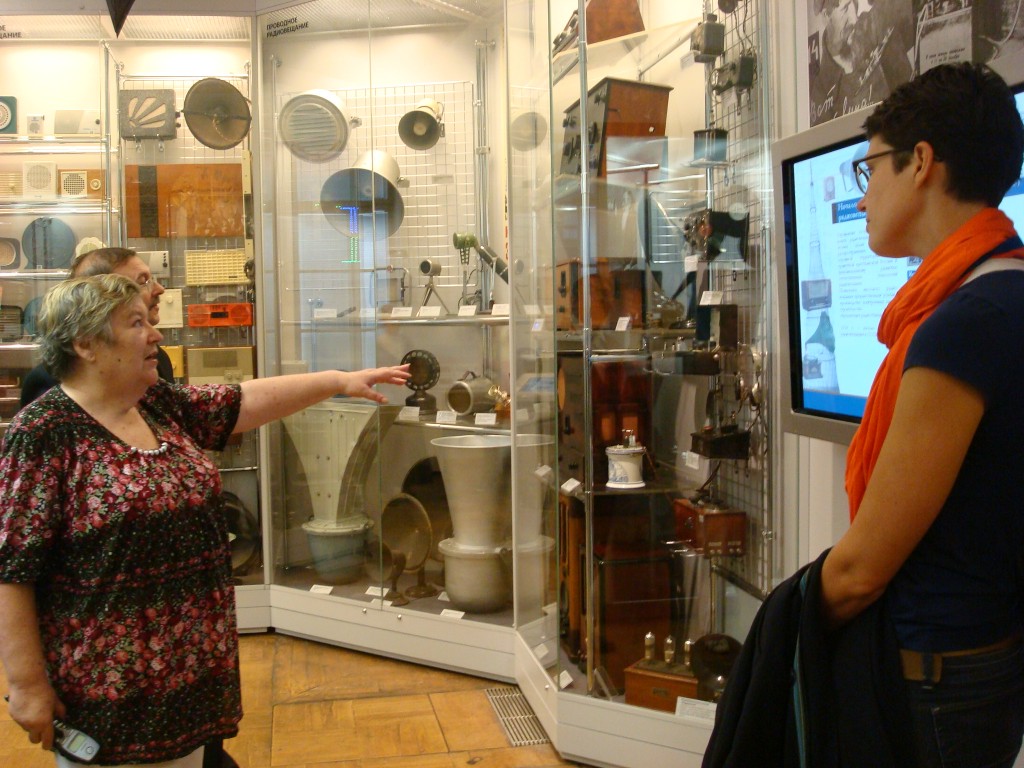 A huge variety of papers was presented, though not many of them connected to the sections topic; and quite a few of them were of a rather descriptive, promotional type. It would have been nice to see more reflections, sharing of both experiences and challenges in the talks; and the same goes for the room for questions and discussions, which was hardly ever given, although running well on time.

Looking back, the papers circled mainly around the role of museums in the shaping of nations and cultural identity; public participation and the negotiation of responsibilities and power between museums and politics.

An impressive frank talk was delivered by Tamara Ognjevic from Serbia, who spoke about the museum scene of her country. Only 50 % of the museums are considered as running well, and the National Museum and the Museum of Contemporary Art in Belgrade have now been out of operation for nearly one decade due to persistent struggles. The ongoing quest for a national identity, the question about what museums are for and who should be responsible for them – both in terms of funding and shaping – remains open.

While the region experienced an ideological misuse of heritage in Soviet times, the 1990s saw a new rise of nationalism, with the museum now considered as a shrine and testimonal of cultural identity. This was the time when the national museum in Belgrade was being set up. But Serbia suffers from ongoing rapid political changes and not so favourable decisions concerning staff policy. An uncertainty arose about the future of the museums and other cultural institutions, which now needs to be solved. Tamara Ognjevic deeply regrets that within the museums, the notion of the state being in charge of them and defining their work is still prevalent and she called for new initatives and autonomy of the museum staff as well as a new cultural policy around the cornerstones of depolitization, decentralization, communication, professionalization and awareness. Outside the national museums, the museum landscape of Serbia is changing heavily: new laws allow the founding of private museums and freelancing, while the whole sector opens up to the markets in many respects.

Hiba Qassar, originally from Syria, explored the museum scenes in Syria, Qatar and Egypt. While in Qatar the museum culture is only just emerging, both Syria and Egypt have long traditions. In the light of the recent events the question comes up, if museum can build identity when the inhabitants are so diverse, and if museums in countries with limited liberty can strive to demonstrate more diversity. Hiba Qassar pled for better communication and a higher level of engagement with the communities in those countries, so the museums eventually become much more relevant to the people there as they are right now. Museums should activate their social role to promote cultural diversity: “In order to be united, we don’t need to be the same.”

Markus Walz, Germany, while looking at the museum landscape of the federal state of Saxony in Germany as an example, looked at some of the determining factors in the decision for the public establishment and funding of museums. Should a state foster the creation of new museums in places with a high number of tourists, or in economic depressed regions, or rather generally dependent on population size and density? Markus Walz left us with the question, who and what museums are for, and how political and economic interests should be balanced with the public needs.

Another two papers addressed specific projects in which public participation in the construction of knowledge played a crucial part in the designing process.  Amy Ballard (USA) reported on the National Museum of African American History, due to open in 2016. While she mentioned many groups and individuals that were consulted in the process, it would have been great to hear examples of when these conversations did actually change the plans and in which respect, especially as four big regulatory agencies are involved.

What does a country choose to surrender, to forget, to remember? Who gets to determine the future? Delivering a paper asking Who is American? on September 11 has a particular touch to it. Masum Momaya, curator of the exhibition “Beyond Bollywood: Indian Americans Shape the Nation”, which is part of the larger Indian American Heritage Project of the Smithsonian. Preparations began in 2008 with the question, whose story should be told in museums and how to define American versus foreigner. Underlying this project were the goals to create a sense of the different cultural roots making America what it is now, and at the same time to honor all the different, individual cultural experiences that shaped it. Unlike other exhibition projects, it did not start with browsing collections and shaping the findings into a narrative. Instead, relationships with communities are built and many objects are crowdsourced (and still are, as the exhibition is meant to change with time). Social Media channels, especially Twitter, invite reflections on the exhibition and are used widely.  Internal challenges included the rejection of certain ideas and objects by the Office of Public Affairs.

Anatoly Budko from the Military Medical Museum in Saint Petersburg addressed the question of museums being temples or experiments, object-focused or Disneyland and came to the conclusion, that museums act between those poles. Politics delegates powers to the (state) museums, in form of objects, images and missions and thus forces the museum to act out the functions imposed on them by the state. Missions are means to solve any conflicts between society and the state; and although he described missions as being formed jointly by the state, the public and the museum, it is the state having the last word concerning the state museums. He compared the role of ICOM Russia in this to a concert: The president being the conductor, ensuring that the museum staff play together harmoniously in this stately museum symphony.

Alexander Nikonow, Director of the Central Museum of Armed Forces in Moscow, shed light on the intersection of museums and politics in the case of the military museums in Russia. Simply put, these are subordinated at the same time under the Ministry of Culture and the Ministry for Defense, which results in additional work through two-fold documenting, different ethical approaches towards the objects, e.g. the recognition as stock versus museum objects that need to be preserved or what should/ can be on display; changing financial support from the ministries dependent on the minister in charge and a lack of qualified museum professionals in the field of military history, especially as salaries are not attractive.

A short discussion arose after the presentation of Nina Borisova of the hosting museum, stating the absence of ideology in technical objects in itself and an effort made by the museum to free the labels of any ideology, regardless of the interest of politics, financial parties or stakeholders, when the museum was reopened. The audience, on the contrary, stated that there will never be such things as labels free of interpretation or political meaning. But all agreed that the selection of topics and objects is. Nina Borisova presented the case of Russian hero Yuri Gagarin, the first man in space, which is not mentioned in a couple of other countries’ museums because, as she believes, he representative of  the Soviet Union. She also made the case in comparing the mentioning of certain scientists or inventors in the histories of research areas (or rather, not), which could depend on both political intention (if the people do not come from friendly countries) or different national narratives.